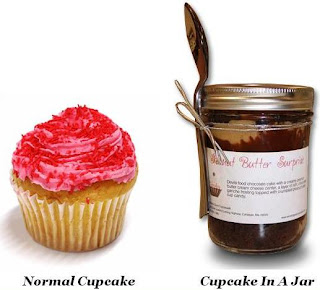 See the difference here?  Normal cupcake, okay to bring to the airport, cupcake in a jar, not so much.

At issue is the cupcake icing, which is considered a gel.

I would think that if the woman had gulped down all the icing from her cupcake in a jar, she would have been allowed to bring it - just as you can bring an empty bottle onto a plane, but not one full of liquid.

That being said, gulping down icing sounds disgusting.  Also, no one sells icing inside the airport, so then you're left with just the cake part, which would be fine by me but not to a lot of people.

Also, I don't think the terrorists are messing around with cupcakes in jars.  I feel like once they started working with cupcakes so much, the hate would just flow right out of them.  I mean, who doesn't get happier when they have a cupcake?


Now I want to make some cakes in jars.  I'm starting with these.