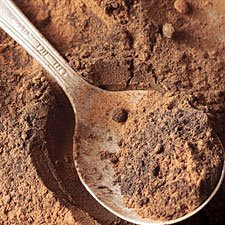 Remember how I said the sourdough chocolate cake was a bit too dry?

I think I know why, and not just because I left it in the bread basket too long.

It's because the recipe calls for natural cocoa, and I used the cocoa powder I had on hand - which is a Dutch-process cocoa.

Cocoa powder is made by grinding cocoa seeds and removing the cocoa butter from the dark, bitter cocoa solids. This is natural unsweetened cocoa powder.

Dutch cocoa is natural cocoa which has been additionally treated with an alkali to neutralize the natural acids present in cocoa powder. "Dutching" makes it darker in color, milder in taste, and, its big advantage, more soluble for cooking.

But because their acidity levels are completely different, you can't just substitute natural cocoa for Dutch cocoa (as I did). Natural, acidic, cocoa will react with baking soda, an alkali, causing a leavening action that makes cakes rise. Dutch cocoa, since it has been neutralized, won't react with any baking soda in recipes. As a result, when it is used instead in a recipe that calls for natural cocoa, the recipe "will fail to form as expected, and the resulting product may be flat or very dry."

And that's how my cake turned out!

Now, I have currently scribbled into the cookbook:

If you only have natural cocoa but the recipe calls for Dutch cocoa...

If you only have Dutch cocoa but the recipe calls for natural cocoa...

If you don't know which kind of cocoa to use in a recipe ...

Look for the presence of other acidic ingredients - if there are no other sources of acidity, the recipe may need natural cocoa.

Does the cocoa need to dissolve easily? It may need Dutch cocoa powder. Natural cocoa needs to be dissolve in hot water or alcohol.