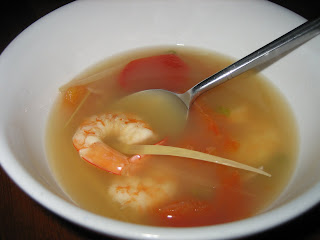 One of Foodgoat's current favorite dishes is something he calls Blade Runner soup - an Asian noodle soup inspired by what for me is the most memorable scene in the film.

But our very first time making an Asian-style soup was a rare abject failure.

I read Saveur because the food is as authentic as it gets, it hasn't been emeril-ified or americanized or low-calorie-inated. Alas, that's the reason I don't often cook from Saveur: the ingredients are so exotic that I don't know what they are or where to find them.

That's the point where I usually give up. Fortunately, there is an Asian spice stand at the West Side Market, and she not only had kaffir lemon leaves and lemongrass and palm sugar, but she asked me if I needed galangal too, thereby sparing me from having to try to say it correctly.

Too bad the recipe didn't work out.

We neglected to rinse out the shrimp thoroughly, resulting in a gawdawful bottom of the sea taste. And the jalapeño we threw in made burn all the way down my throat, which is just too spicy. And we added too much water.

We ended up actually throwing the whole dish out.

Good things though: palm sugar in the soup rocked. And we discovered a new ingredient in galangal, a root related to ginger. Both are now in Foodgoat's repertoire, and Foodgoat managed to make Blade Runner soup, quite tastily and successfully, several times since then.