I thought it was some holiday made up by the giant doughnut corporations, or the Big Doughnut Lobby, but there is actually a nice history behind it.

National Doughnut Day started in 1938 as a fund raiser for the Chicago Salvation Army to help the needy during the Great Depression. It honored the Salvation Army "Lassies" of World War I, who served doughnuts to soldiers behind the front lines in France. The Lassies were female volunteers who made home cooked foods, comfort and support to the homesick troops - the only women outside of military personnel allowed to visit the front lines.

It started in August, 1917, at the battle near Montiers, France. Salvation Army lassies made donuts using left over flour, a wine bottle as a rolling pin, a baking powder tin for a cutter and a tube for making holes (later, a seven-pound shell fitted with a one-pound shell was used to cut out the donut holes). Donuts were fried - seven at a time - in soldier's steel helmets on an 18-inch stove.

They made 100 donuts before their tent collapsed in the rainstorm, but it was an immediate success, and before long, 9,000 donuts were being made around the clock ... and the tent became the first 24-hour donut shop.

Soon, Salvation Army lassies were making donuts wherever the war was being fought. 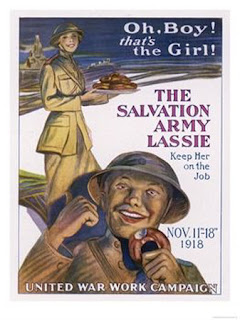 Here is the original recipe, which is admittedly scaled a little large for the typical family:

Or, you could just go get your free donut at one of the many doughnut stores offering free donuts today.
Cream sugar and lard together, beat eggs, add evaporated milk and water. Add liquid to creamed mixture. Mix flour, baking powder, salt and nutmeg in large sieve and sift into other mixture. Add enough flour to make a stiff dough. Roll and cut. Five pounds of lard are required to fry the doughnuts. Yield: approximately 250 doughnuts.