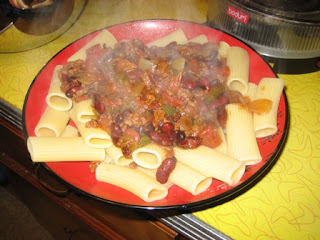 I've been campaigning for Foodgoat to make Cincinnati chili ever since we saw Anthony Bourdain have a unpleasant-looking, probably worse-tasting, chain store plateful of the stuff on the Cleveland episode of No Reservations. But although his particular dish and the restaurant he go it from didn't look all that good, the theory behind Cincinnati chili seemed pretty sound to me. Pasta = good. Chili = good. Cheese = good.

Ergo, we should make our own.

And then it showed up on the Saveur 100! We must have some now! 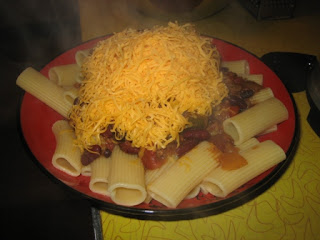 Of course, Foodgoat's version is slightly different from the traditional version of Cincinnati chili. For one thing, instead of spaghetti, we used rigatoni. And our chili was thicker and spicier, rather than the thinner version laced with Mediterranean spices like cinnamon, cocoa, cumin, and allspice.

We had a pile of cheddar on top (making it a three way chili; with just pasta and chili it's a two-way chili), but we could have also added chopped onions as well (four way chili). Kidney beans would make it a five way chili, but since we had kidney beans already in the chili, I'm not really sure what number assignment to give it.

Despite of, or maybe because of, these deviations, Cincinnati chili turned out to be very filling, and very tasty - an excellent way to use the leftover chili.