My Bologna Has an Ingredient, It's Mechanically Separated Poultry 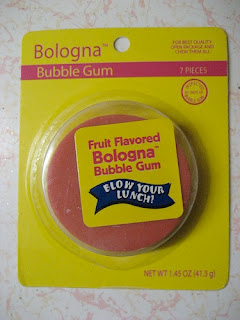 Foodgoat didn't like bologna before, and he disliked it even more after learning (from the excellent episode of Modern Marvels about cold cuts) that one of the key ingredients was "mechanically separated chicken. "

You can figure out what this means. But maybe you can't, and if that's the case, it is:

... paste-like and batter-like poultry product produced by forcing bones, with attached edible tissue, through a sieve or similar device under high pressure to separate bone from the edible tissue.

Fortunately, mechanically separated meat (MSM) must be labeled as such in the ingredients statement.

Not for fortunately, mechanically separated meat probably contains lower-quality protein than that found in meat from muscle tissue, and bone marrow, so it's higher in fat and cholesterol. Not to mention that it's just plain old gross-sounding.

Makes you want to go out and try that bologna bubble gum, doesn't it?