Maybe The Turducken Is Why Santa Has a Belly 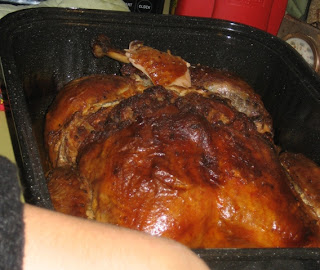 On Christmas day, we spent the day with our good friends, their lovely family, and their very, very large turducken.

A turducken, in case you don't know, is a chicken in a duck in a turkey, with layers of yummy-ness in between. It's like those nest Russian dolls, but with meat, so it's better. We had never had it before, but thanks to John Madden, we had been wanting to try for years. 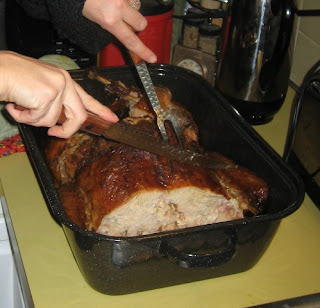 ''The first one I ever had I was doing a game in New Orleans,'' Mr. Madden said. ''The P.R. guy for the Saints brought me one. And he brought it to the booth. It smelled and looked so good. I didn't have any plates or silverware or anything, and I just started eating it with my hands."

When you think about it, a turducken sounds like an abomination. Perhaps God did not intend for us to kill, debone, the stuff a bird inside a bird inside a bird, especially on Christmas. But then I learned that the record for a nested bird roast is 17 birds - a Rôti Sans Pareil or Roast Without Equal - at a 19th century royal French feast, starting with a tiny garden warbler and ending with a bustard, with apparently every edible fowl creature, including what are now protected species, in between. The turducken seems positively modest compared to that. 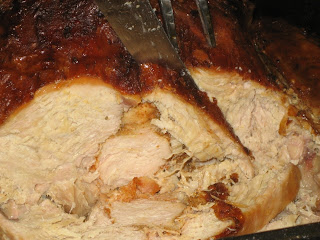 And here is the delicious turducken cross-section! It's like one giant turkey-sized meat roll. Mmm! 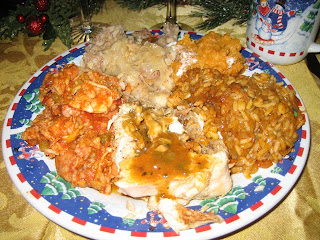 As if turducken wasn't enough, we also had piles of other good things to eat.

How did it taste? Very good, surprisingly. I thought it would just be a novelty dish, but I liked it much better than straight up roast turkey, which is usually plain and dryish. The turducken and its various stuffings didn't lack for flavor, and the assortments of meats actually added up quite nicely. We kept on turduckening!

You could guess what happened next: Foodgoat and I realized that we are not cut out for binge eating. Those competitive eaters could probably eat circles around us, because this Christmas turducken took us down.

The turducken seemed to have some kind of expanding-in-your-tummy quality, because "fullness" does not begin to capture the feelings our stomachs felt in the hours after eating. "Stuffed" would be closer. "Overstuffed" would be just about accurate. We were so full we didn't really eat for the whole two days.

And yet, we'd definitely do the turducken again. Well, maybe a little with just a little bit less. Just a little.