The Theorem of the Cheesy Ratio 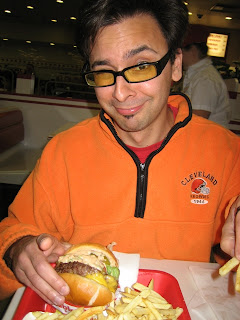 After waiting months in the In-and-Out-less Midwest wilderness, Foodgoat finally got to go to In-and-Out again while in California.

The last time he was there, he got a little silly and had a 2x6 - two patties, six slices of cheese. Afterwards, he conceded that it might have been too much cheese.

Being older and wiser, this time he stuck with the more delicious 2x4, animal style.

But while awaiting his order, he noticed the receipt listed a 4x4 animal style. Foodgoat caught a worker and corrected the mistake.

He sat down to eat, only to discover that it had not been corrected at all. He still had a gotten 4x4 animal style. Four meat patties, four slices of cheese. What could he do but eat it?

What does this teach us? Well, it proves Foodgoat's Theorem of the Cheesy Ratio, developed after the 2x6 experiment.

The Theorem of the Cheesy Ratio explains why the 2x4 works by describing the perfect proportion of meat to cheese - of two slices of cheese per one meat patty.

Too much cheese - as in the 2x6, which has three slices of cheese per patty - and the cheese doesn't quite melt right. Thus some of the cheese is a little cold, and the whole meat-cheese tastiness is dependent on adequate meltedness.

Too much meat - as in the case of the 4x4, which has 1 meat patty to 1 slice of cheese - and you don't have enough cheese to balance your meat. This is especially important the higher you go in number - a cheeseburger (1 patty to 1 cheese) may be tolerable if you're of small appetite, but get up to 4x4, and you might feel you're just chewing down a pile of meat without enough cheese to make it worthwhile.

But in the right proportion - as in the 2x4, 2 patties to 4 cheese slices - there you find enough meat to be filling but not overwhelming, enough cheese to be tasty but still melted properly.