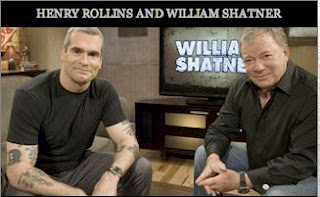 I thought I had a good Thanksgiving, with I only had my family and a turkey and mild, snow-free California weather, but Henry Rollins went to the Shatners' for his Thanksgiving. That might be the Thanksgiving jackpot.

Foodgoat was happy to re-discover Henry Rollins, whose music he admired in his youth, in the form of the Henry Rollins TV show. Watching Henry Rollins is like watching Foodgoat's two best friends talking out of the same body. And on TV. With William Shatner. Which is awesome, but also kind of creepy.

He was very disappointed to learn that up until last week, I had a no idea who Henry Rollins was. He may have been more disappointed that he didn't find out this all-important fact prior to marriage.