Mamas, don't let your babies grow up to play Warcraft

It has now been a WHOLE WEEK since Foodgoat declared himself done with playing Warcraft and quit cold turkey.

Thus far, withdrawal effects have been minimal (he has checked himself into the methodone program known as XBox 360). And if his rehab sticks, he may be one day be the fully functional Foodgoat again. Meaning, cooking adventures may start up again in earnest. One can't fully inhabit the kitchen if one is playing five days a week.

Perhaps he could also use more inspiration. And today I stumbled upon someone who might be a man after Foodgoat's own heart: Anthony Bourdain. 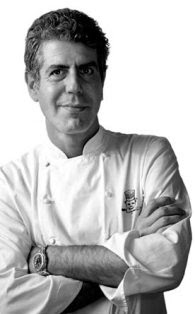 Although he's a giant among foodies, I thought he was just some snobby French chef, so I never saw his show, nor did I ever read "Kitchen Confidential". Alas, little did I know that his philosophy of food fit so closely to our own. Eat for pleasure. Try everything. Relationships are built over shared meals. Rachael Ray is the devil.

His talk with the Commonwealth Club of California that he completely won me over (listen to it here), talking about stuff from favorite meals, the Food Network, immigration policy, foie gras, and Mario Battali.

Now excuse while I run out to get a copy of ">Kitchen Confidential so I can read it out loud to Foodgoat.