Winter Squash: The Risk, The Reward

I usually avoid winter squashes altogether.  Not because I don't like them, in fact, I think they're delicious.  No, there are three reasons:

1.  I am afraid of suffering bodily mutilation in the process of cutting them up.  Butternut squashes, in particular, mock me with their hard, hard shells.  Sometimes I think I should try to take a power tool to them, but then me + power tools does not necessarily reduce the likelihood of bodily injury.


But thanks to my CSA, we amassed a collection of large and small winter squashes and I either had to admit that they were just there in a feeble attempt at autumn decor or go ahead and cook them.

So I took the acorn squashes and the hubba hubba squash and the other varieties I don't remember the names of (seriously, there are lot of different kinds) and cut them up with the sharpest knife we had.  Then I tried the heaviest knife.  And I think the heaviest knife is the one to go with.

Because I didn't want to spend any more time with the knife than I had to, I just cut them half and roasted them with olive oil.  And there's the other reason I generally avoid the winter squashes.


So I had a bunch of roasted squash halves, finally.  Now what?  Enter reason #3.

3.  I have no idea what to do with cooked squash.

Having exhausted all my cooking mojo just cutting up and roasting the squashes, I don't know what to do with it now.  Eat it like that? Stick it in the freezer until inspiration or an appropriate recipe crops up? 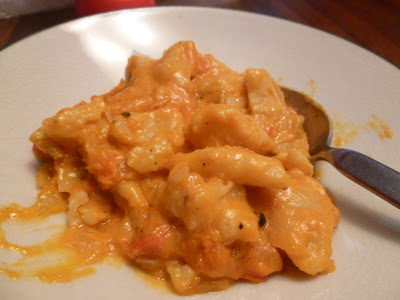 And just like that, he whipped up a roasted squash dumplings with one kind of squash, with a squash sauce made with another kind of squash.

Has this ever been made by anyone, ever?   I have no idea, but Foodgoat just made this whole dish up on the fly, and it was sooo delicious.

It was totally worth the risk of bodily harm.