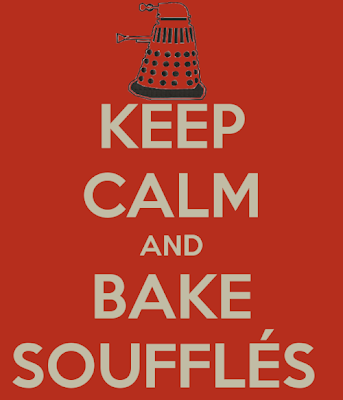 How did you like the new Doctor Who episode?  Most of our TV show watching in recent years has been Netflix-based, whole-seasons marathons, so it's nice to watch the new season of Doctor Who as it airs, on a weekly basis.  That way you get a whole week of anticipation and then a whole of week of processing/discussing/explaining.

So this week, what's on my mind is what's the story with the spunky-cute Oswin?

Actually, I get a whole three months until the Christmas special to contemplate her next appearance.  How will it happen?  What IS her story? I don't know!  It might be awesome.  It might be disappointing.  I don't know, this is Moffat, after all, and it can go either way!

Until then, I'll be looking up souffle recipes and methods.  I've never had a souffle, I've never made one, it sounds terribley difficult, and apparently requires lots of eggs.  But Doctor Who is nothing if not inspirational.