You Want to Add What to the Chicken Paprikash?

Foodgoat's sous chef, the delicious bottle of beer, has made many excellent cooking suggestions to Foodgoat in the past. He has recommended more hot sauce, the adding of a new spice, the use of more beer. Once in a while, it doesn't work (usually, too many hot peppers), but overall, his suggestions have been good ones.

But this time, the suggestion was so out there, Foodgoat wasn't sure if he should listen or not.

The dish was chicken paprikash, which Foodgoat has made so many times he could make it in his sleep. Having perfected the recipe, he has taken lately to playing around with it, adding new ingredients and twists. But was this idea of new ingredient too weird for an old standby?

What did that bottle of beer suggest that Foodgoat add to chicken paprikash? Chocolate.

The extreme dark chocolate chips that we used for sourdough pancakes.

He added a handful, and wouldn't ya know it, it actually tasted wonderful. Because we used dark chocolate, it actually gave it an earthiness rather than a sweetness that didn't seem chocolate-y at all. Adding even more chocolate the next day turned the chicken paprikash into something akin to chicken mole, which was further afield, but still delicious. 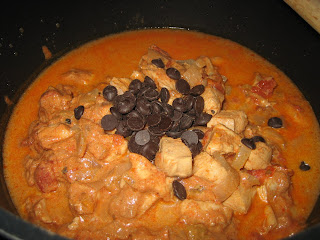 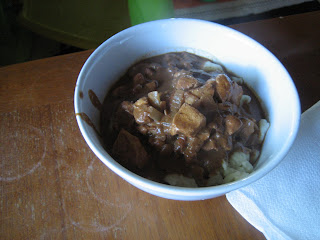