On the right day, this time!

It's been two years since the day Foodgoat and I got married and celebrated with our families and friends at a reception in lovely but cold San Francisco. While I made most of the decisions regarding the food served, it was Foodgoat who handled the beverages, and he who insisted early on that we have an open bar. (The open bar/cash bar and everything in between debate can be a fierce one for others.)

I didn't know what a big deal this was for my family until more than one cousin ran up to us in excitement, saying, "Open bar! Filipinos don't have open bars!!"

So despite the fact that my family doesn't drink often, and with the encouragement of one groomsman who took it upon himself to see that everyone, at any given point, had a drink in his or her hand, we drank the liquor provider dry that night.

Not a single drop of alcohol - no beer, no wine, no liquor - remained at the end of the night.

All in service of getting happy drunk, which is the best possible goal for a day like that. 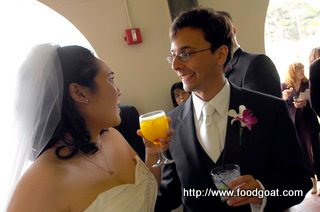