And so begins the Great Robot-Human War 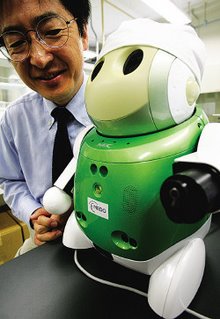 It all started out so innocently.

Researchers in Japan recently revealed a robot sommelier. Using an infrared spectrometer, it can identify dozens of different foods in a childlike voice, naming wines and what kind of foods might go well with them, recognizing the kinds of wines its owner prefers, and alerting its owner to possible health issues by warning against fatty or salty products.

Buried in the middle of this fluffy report was this ominous sign:

"When a reporter's hand was placed against the robot's taste sensor, it was identified as prosciutto. A cameraman was mistaken for bacon."

Considering the things that I am willing to do for a taste of bacon, this may be the beginning of end.