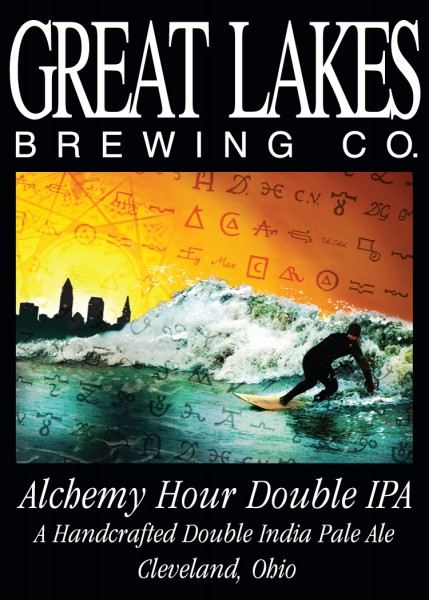 The new Great Lakes Alchemy Hour Double IPA is not only the beer of choice here lately, it may be one of the best beers Foodgoat has had.  And though I, unlike Foodgoat, don't often cotton to the big, bitter, hoppiness of the IPA style, Alchemy Hour is so smooth and so nicely balanced that even I really like it.  Oh, it's still heavy of the hoppy, but they seem to have captured it in just the right way.

Foodgoat is buying this by the case, though at 9.4% ABV, we've learned you might want to enjoy this beer pacefully, which is not a real word but could be if you say it with all the authority conferred by English lit undergrad degree.

Next year, though, we'll have to look for it under a different name.  Will it be another surfing phrase, since they were inspired by the (I have to believe the few) Cleveland surfers who brave the lake in near-freezing temperatures?   The only phrase that comes to mind is "Straight Up Crazy" but somehow I don't think that is exactly the sentiment they are trying to express here.