The Best Way to End a Day at the Beach 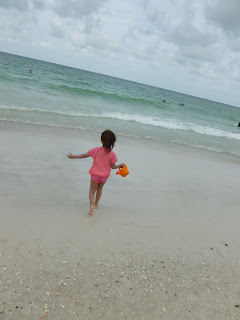 What's the best way to end a day at the beach?  Especially when it's the very first time for a Princess Goat and a Goatling to stick their little toes into the ocean, walk into the waves, and make sand castles on the shore?

After a day at Holmes Beach near Tampa, Florida Foodgoat steered us  to a little stand he spotted on the drive in called the Shake Pit.  It's an old school type of place that's been there since 1959 and looks it, and they had some truly delicious ice cream. 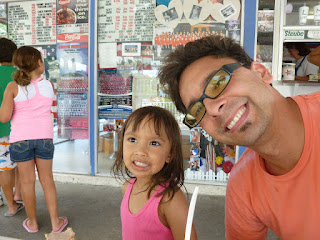 The Princess Goat had both the vanilla and the chocolate and loved them both.  The Goatling had no complaints either. 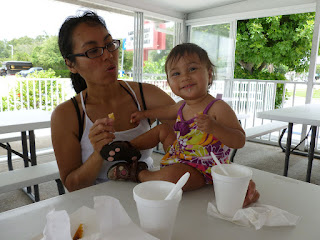 Our stop also taught us a lesson about not throwing away your child's uneaten portion of chocolate ice cream without telling them, and then when they ask for it a second you've tossed it out, telling them that you're saving it for them for later.  Don't do that.  Because then they're going to say it's going to melt.  And then you have to say it's okay because it's in a cooler.  And then they ask what cooler?  And then you have to tell them there's a cooler they didn't know about in the car.  And then they're going to ask where in the car?  And then you have to just hope that they fall asleep on the ride home because maintaining a fiction with a three year old who asks a lot of questions becomes harder and harder to do.