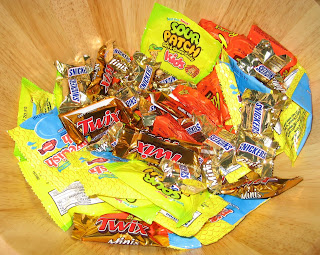 Halloween, one of the best holidays in the year, when we go through the time-honored tradition of choosing trick-or-treat candies. It's a big decision. We never, ever eat candy. This is the one time of year that we eat any, so we choose that candy with care.

Trick or treaters were allowed to choose two out of a giant candy bowl (even the kid who dressed as a Yankee, who was lucky I let him have anything). This year, our offerings to the children of our community included:
The best part? Lots of leftover candy, just for us.