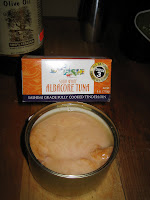 We did a double take at the price tag of Ecofish Solid White Albacore Tuna. Our mothers would have a fit if they found out that we paid $7 for one can of tuna. It wasn't even on sale.

But curiosity got the best of us: how much better could the outrageously priced canned be?

So what might justify the high price of Ecofish over your $0.89 variety? Sashimi grade, solid white meat tuna, hand filleted and packed. Independently tested for mercury and PCB’s. Sustainably produced. 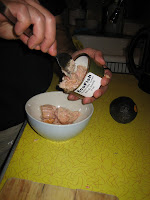 But it came out to be a delicious tuna melt sandwich. Yes, it was pricy. But it had really good tuna. Delicious tuna, that tasted just like a real tuna steak. It was noticeably different (and better) than the other canned tuna we usually get.

Hmm, which leaves me with a dilemma. That was really good canned tuna. But I can't deny that $7 is kind of pushing it.