Sake It to Me: Sake and Pork (But Not Together) 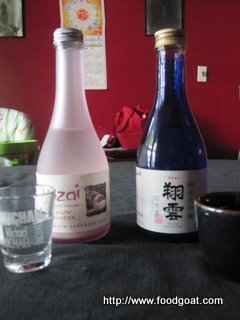 At first, it was just about trying a new sake. Then we thought, well, if we're going to try one sake, we might as well try two, and do a side by side taste test.

We sipped some of the Tozai Snow Maiden, then took a closer look at the actual contents of the pretty pink bottle, and had to give it a shake and pour it again.

Why? It's a nigori sake - unfiltered, and thus cloudy, sake. 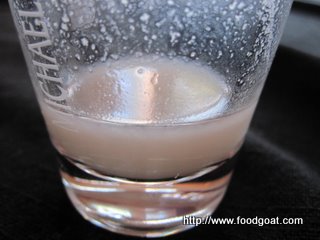 The other sake was the more common, filtered sake, but both these sakes were dry, smooth, and delicious.

The real surprise, however, came after the initial tasting - when we had the sakes with dinner. In this case, pork. Breaded pork.

Alone, they tasted nice, clean, and refreshing. With pork, both sakes were awful. And by awful, I mean harsh, sharp, and alcoholic.

Before this rude awakening, I didn't think much of wine-food pairing efforts and rules. Besides making meal time decisions even more complicated, I couldn't imagine that it would make all that much of a difference what wine you poured to go along with your meal. Good wines should taste good with good foods, right? But maybe not - maybe pairing foods and wine really does have a significant effect on the taste.

For example, why the rule of only white wine with fish? Because the big robust flavors of red wine overpower delicate fish dishes. But also because drinking red wine with fish often produces an unpleasant, fishy aftertaste - the result of higher amounts of iron in the red wine.

There doesn't seem to be a general rule against serving sake with pork. Except now in our house, where breaded pork will not now be served with sake. And we'll pay more attention to how wine pairs with foods.