Nine weeks to go, and the big question is: am I a boy or a girl? Nobody knows!

Some people thought it was a good idea to keep my gender a surprise, and some people seem to be annoyed and frustrated by the suspense. Some have strong convictions of one side or the other, but an informal poll is pretty evenly split.

Did diet have anything to do with this? According to old wives tales, women who eat more meat and salty foods get a boy, while those who eat more sweets and desserts get a girl. New research also suggests that a higher calorie intake around the time of conception, with its higher quantity and wider range of nutrients, is linked to boys. There was also a strong correlation between women eating breakfast cereals and sons.

So what was Ladygoat eating around January?

In other news, to pass the time, I've been trolling the web. Here's some stuff I found:

from I Can Haz A Cheezburger, courtesy of my soon to be uncle PJ ... 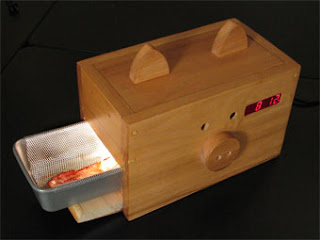 and an alarm clock that wakes you up with the smell of bacon ... by actually cooking a piece of bacon by two halogen lamps. Delicious!