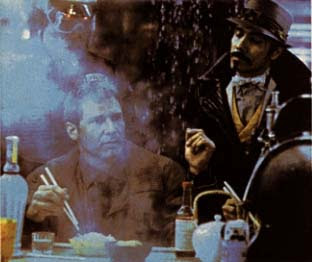 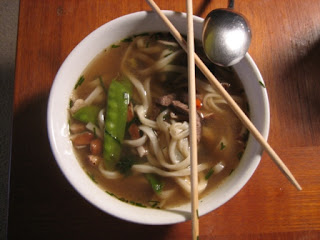 We watched the sci-fi cult classic Blade Runner for the very first time a few weeks ago, and the only thing that really stuck in my mind was early in the film, when Deckard was eating at a noodle bar. Against the dark, noir future, that hot, steaming bowl of noodles looked so yummy.

So Foodgoat was inspired to make his very own bowl of noodle goodness, venturing into Asian cuisine territory. For this he employed not only frozen noodles from the Asian market, but some other new ingredients we happened to have on hand due to a failed Saveur magazine Thai recipe, including a root called galangal, which looks like a pale ginger. I've seen the taste described as similar to pine or to cloves ... different from ginger but still a sort of spicy root taste.